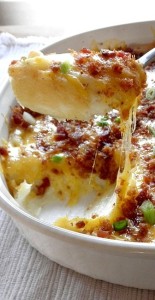 Y’all pretty much know by now how I feel about potatoes, but for those who don’t , i can’t imagine my way to the local grocery store or flow market without picking up a big bag of potatoes :). Potatoes making a regular appearance on the supper plate in some form, including casseroles like this, that center around potatoes. Whether you take the time to roast them, or boil them and mash, they never seem to disappoint. To me, it means being a meat and potatoes kind of person, right ?? Just imagine them being crisp, greasy, cheesy, and bacony. Mmmm… I might be out of control. Recipes very similar to this casserole popping up just about everywhere in the food blogging community, and mostly they come in a mashed potato form, but this version have a unique flavor that comes from a potato being twice-baked, sour cream, cheddar cheese, bacon and green onion – all the goodies we love to indulge in every once in awhile.